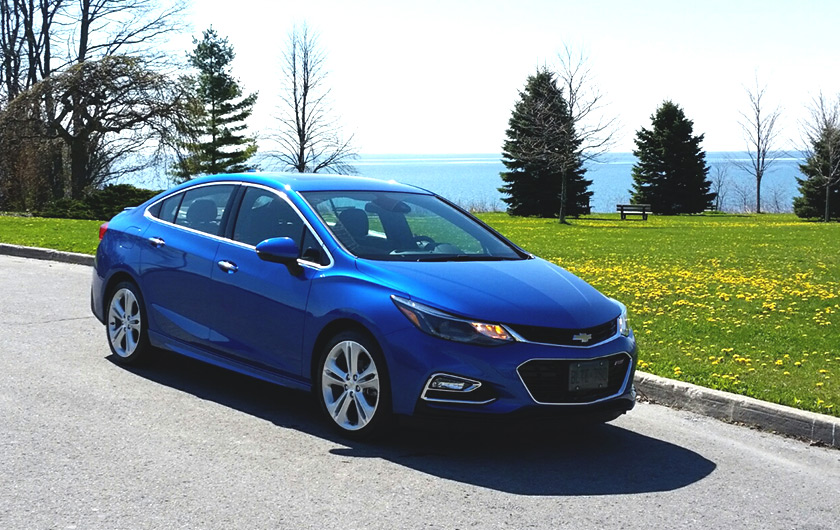 Recently, I upgraded my car from a 2014 Chevrolet Cruze 2LT RS to a 2016 Cruze Premier RS. What do you get when you make the upgrade from the 1st Generation Cruze to the 2nd Generation?

Chevrolet’s mission has been “Longer, Lower, Leaner.” The weight saving efforts have been applied throughout the lineup including the current generation Silverado, Malibu, Volt, Spark, Camaro and the Cruze. From one generation to another, the Cruze is 147 pounds lighter. The difference is definitely noticeable with the more powerful 1.4L Turbo Engine, up 15 HP to 153 and 29 lb. ft of torque to 177. Torque is where the power comes from. The 1st Gen engine pulled, but this version pulls that much more. Normally, with the increase in engine power you’d expect to use more fuel. Not here. The 2016 engine gives the same fuel economy as my old car. That’s awesome. (Now, don’t ask me if my car matches the EPA fuel economy. I use the Turbo All-The-Time.)

As much as the previous Cruze had a style of its own with the “cat-like” eyes for head lights and the traditional Chevy styling in the front grill and the rear tail lights having 4 circles. The All-New Cruze accentuates the new face of Chevrolet seen in the 2016 Volt, Malibu and Equinox. Details in the accelerated hood line and new projector head lamps plus the signature Day-time running lights. These are VERY similar to the 2016 Camaro RS Day-Time lights. The current Generation Corvette created the new family style of the “Hockey Sticks” tail lamps. Here you can see the resemblance in the Cruze.

This car was born in a wind tunnel. The Accelerated slope of the windshield and rear window give the Cruze a slippery profile. The curves and creases create a whole new style in the compact car segment. 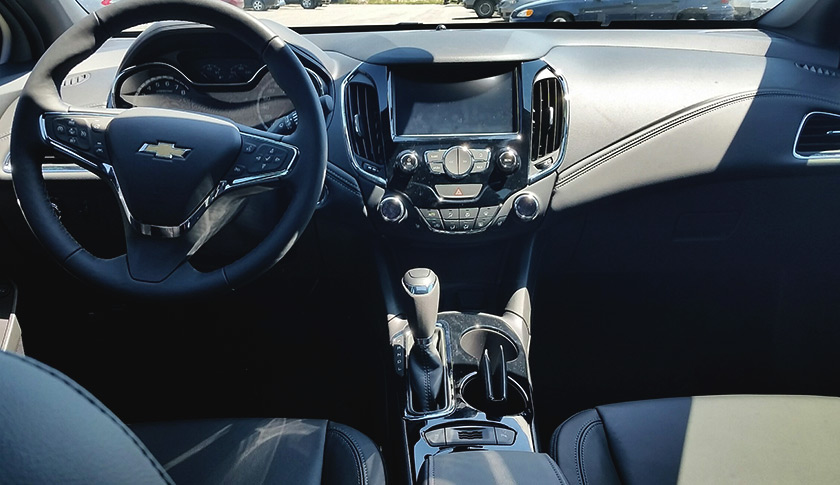 On the inside, with the windshield being pushed forward, you get a feeling of more space over the front dashboard. From both door handles, everything swoops symmetrically into the centre infotainment stack into the HVAC controls into the centre console which includes the gear shift and the armrest.

One area of common concern with the previous Cruze was the back seat room – particularly the leg room of the rear passengers. Perfectly addressed in the new Cruze. The car’s overall length increasing 1.524 cm, the wheel base stretches 6.858 cm, which translates to more knee room in the back seat.

This car is loaded with new technology. When I was deciding on the 2014, I chose the 2LT. The top trim LTZ would’ve provided Navigation, Auto Climate Control and Rear Park Assist for an extra $3000. With this Premier, two available packages are the True North and Technology and Convenience packages. This includes a long list of features including Forward Collision Alert, Lane Departure Warning with Lane Keep Assist, Side Blind Zone Alert, Rear Cross Traffic Alert, Rear Park Assist plus Navigation and Bose Sound System using Chevrolet’s 8” Mylink Infotainment system, plus wireless cell phone charging plus plus plus. All this costs less than the previous LTZ trim. More for less; how can you go wrong?

As you can see, the All-New 2016 Chevrolet Cruze is better in every way: more power; more space; more tech; more safety; more money in your pocket. But don’t take my word for it. Come see for yourself. I’m here to help.